A journalist has shared his “relief” after his aunt’s murderer died in prison.

Jason Collie has spoken out after the death of John Reid, who tortured, sexually assaulted and then suffocated his aunt Elaine Collie at her Edinburgh home in April 1999.

Evening Standard journalist Jason, formerly assistant editor at the Oxford Mail, learned of Reid’s death from his father and Elaine’s brother, Fred Collie, who was contacted by the Victim Notification Scheme.

The circumstances surrounding Reid’s death have not been confirmed. 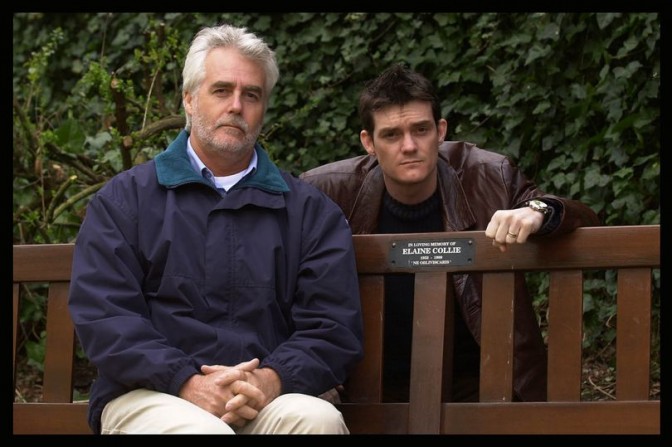 Jason Collie, right, and his father Fred at a memorial bench to Elaine Collie

Speaking to the Edinburgh Evening News, Jason said: “For us it’s relief that it’s over, and relief that he was never free to be a threat to anyone else.

“That’s what we were always worried about.”

Reid was sentenced to life in prison at the High Court in Edinburgh in October 1999 after pleading guilty to Elaine’s murder.

At the time it was recommended that he serve at least 15 years, but her family did not believe the sentence far enough – leading Jason and his father to conduct an investigation into Reid’s previous offending.

They compiled a dossier of statements from a number of his previous victims, as well as analyses from clinical psychologists.

Fred had sent the dossier to the board at Reid’s parole hearings, held every two years since 2014.

Jason added: “Having uncovered his past and the times he managed to effectively evade justice, this was a very dangerous man.

“Unfortunately, Elaine was his victim but we did not want there to be any others.”

Asked if the family felt Reid could have ever been rehabilitated, Jason said: “It’s very difficult to make an informed judgement but we had been told he had not done a lot of the sexual offender programmes during his time in prison, and from what we know about his past, we never thought he would be safe to be released.

“We would imagine that many of his other victims would be relieved because they will never face the prospect of bumping into him, so that gives them some closure.”