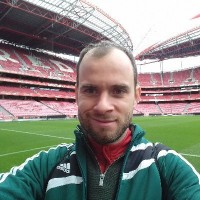 A journalist who is out of work for the first time in 17 years has posted a video CV on YouTube in a bid to reach potential employers.

Jon Mattos, pictured, has made the move after applying for more than 90 jobs without success, following a period of unemployment due to the Daily Telegraph’s contract with PA ending.

The video features his curriculum vitae and images from his portfolio of work for PA, the Hull Daily Mail and the Nottingham Post.

At the Post, he served as head of sport and production editor during a four-year spell between 2012 and 2016, and most recently worked as a sub-editor on PA’s Telegraph contract, based in Howden.

Speaking to HTFP yesterday, Jon said: “I only produced the video CV on Tuesday evening and started circulating yesterday on Twitter, Facebook and LinkedIn.

“I have applied for over 90 jobs so far and got nine interviews out of that and one informal chat about a role later this morning. Hundreds of people are applying for every job so it is easy to get lost in a sea of CVs and covering letters where many of us have similar experience.

“I just wanted to stand out from the crowd a little and be creative in any way I can. I am a proactive person so want to be doing more all the time to get the desired outcome.

“Hopefully this can help in some small way. So far in just 24 hours my post on LinkedIn has been viewed over 500 times and the video viewed on YouTube over 200 times.”

Father-of-two Jon, 37, lives in East Yorkshire and is looking for work within a 60-mile radius or home-based jobs due to family health issues.

He said: “I have had a lot of positive, kind words from people I have worked with or went to university with over the past 20 years which is nice to know people are backing me as it can be a little soul-destroying when you get rejected for a job before or after interview stage.

“I missed out on a job the other day after three interviews and two written tests and that left me feeling down, but I didn’t want to stew on it and so got out my old archives and got to work on this video.”