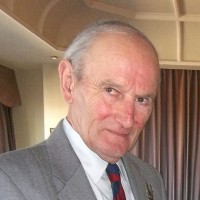 An 83-year-old journalist has said farewell to his hometown daily after an association with the newspaper stretching back more than six decades.

Peter Chapman has written his last piece for the Grimsby Telegraph, where he first worked as a junior reporter in 1958.

Peter, pictured, has produced the Telegraph’s ‘Odd Man Out’ column since 1988, even following his retirement from full-time work in 1999.

He has also written four books, including ‘100 Years of The Grimsby Telegraph’.

Peter told the paper: “I love the Grimsby Telegraph because I love Grimsby. I can’t imagine the town without its paper.

“I have enjoyed writing Odd Man Out.”

Peter served with the 12th Royal Lancers following his initial spell at the Telegraph, moving to work on Fleet Street after leaving the Army.

He then became assistant editor at the Aldershot News, but returned to Grimsby in 1967 with his infant son Giles following the death of his wife Susan.

Peter edited The Lincolnshire Life magazine, while he and his friend Colin Carr founded This England magazine, before an eight-year break from journalism during which he ran an antique shop in Grimsby.

He returned to the Grimsby Telegraph in the late 1970s at the request of Frank Shelton, who edited the paper from 1973 to 1982.

Discussing his career, Peter said: “You are entrusted with all sorts of intimacies and information and you cannot divulge what is said in confidence.

“Trust is very important to everyone. People have to be able to speak freely to a reporter.”