Journalism students made front page news after working with a regional daily to launch a new campaign – producing a pullout for the newspaper in the process.

Students on the MA journalism course at The University of Sheffield appeared on the front of Sheffield daily The Star, with which they are working on a campaign to get better lighting installed across the city’s green and open spaces.

The students devised, researched, wrote and edited content for an eight-page supplement inside The Star on Thursday.

The Star splashed on the campaign’s launch, pictured below, and editor Nancy Fielder praised the students for their work. 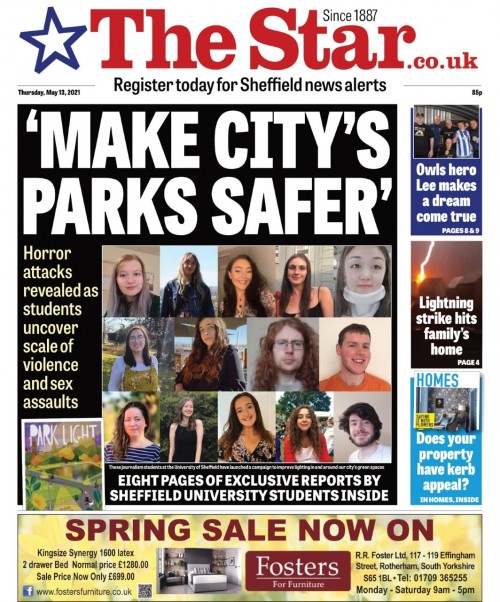 She said: “It has been great to work alongside such talented and enthusiastic future journalists.

“The standard of their reporting – from first coming up with the project idea to finishing off the pages and videos – has been far higher than we could have imagined.

“This has been an exciting project for both The Star and the university.

“I am sure our readers will enjoy every word of the special supplement and I hope the campaign is successful in making our parks safer.”

The project was overseen by former journalist and magazine editor Joely Carey, now co-leader of the students’ course.

Said Joely: “This is regional reporting at its best. The student journalists worked hard to deliver quality reporting which is borne out by the fact that the campaign was intended as an in-paper supplement – but ended up carrying the front page.

“That says everything you need to know about the quality of the work they produced. They also produce this and sat a NCTJ exam in the same week – no mean feat.

“The campaign took in an issue that was of real concern locally, the team took a topic and then researched and investigated it further to uncover some data that needed more expert analysis which gave some hard-hitting detail.

“They then used their journalistic skill to empower and amplify local people’s stories and concerns. This is the epitome of great journalism.”