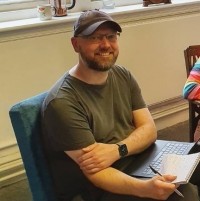 A reporter has left a regional daily to launch a rival title – creating journalism jobs in the process.

Dan Hayes, pictured, has announced his departure from Sheffield daily The Star to set up the Sheffield Tribune, an online newsletter that aims to produce “slower, more considered and thoughtful journalism”.

He has taken on trainee Andrew Dowdeswell for the Tribune’s launch and also will use stories created by local freelances, while receiving “some air support” from journalists working on Manchester-based independent title The Mill.

Dan, who has worked in the industry for almost six years having come to journalism “relatively late in life”, says he has launched the Tribune after claiming newspapers “now treat readers as a commodity to be ‘farmed’ for page views”.

The Tribune will be funded by paying members whose contributions will allow Dan to “grow the team”, while almost 2,500 readers have initially subscribed to the title’s email list.

In a piece announcing the title’s launch, Dan said: “It seems Sheffielders are welcoming this attempt to offer a different kind of reporting in the city, and that’s hugely gratifying.

“Soon we will launch properly, increasing our publishing schedule and open up paid memberships for those of you who want to receive all our journalism and support our growth.

“Some of our stories will always be published for free to our entire email list, so that we are serving the whole of the city and performing a public interest function. But we hope as many of you as possible will join as members when the time comes.

“The Tribune is based on the idea of quality not quantity. Fewer stories, less noise. We will be pursuing a slower, more considered and thoughtful journalism that aims to inform and entertain readers without bombarding them.

“And it will be funded directly by readers, so we never have to cover our stories in annoying ads and so that we have an in-built incentive to reach for quality rather than for clicks.”

Dan, pictured, also praised The Mill and said he had begun planning for the Tribune’s launch in the Christmas holidays following discussion with the Manchester title.

He said: “Since I began in journalism, my work has increasingly been judged on how many page views I bring in, not the quality of the stories I write. This changes the type of reporting you do, neglecting important issues for more sensationalist fare.

“Just a few months ago, one of the main local newspaper groups was criticised on Twitter after running a series of identical reports across all its websites about a BBC Breakfast presenter’s ‘unusual’ food tastes. Needless to say, later the same day I was asked to write a story about the fact Louise Minchin puts marmalade on her sausage sandwiches.

“And picture articles — or ‘PAPs’ as they are called in the trade — are even more cynical. Originally intended as a way of showing off good photography, they are now used to squeeze more page views out of stories by making you click on multiple web pages rather than one.

“This keeps the bean counters happy but does nothing for readers. As a reporter, creating one is more akin to being on an assembly line than journalism in the way most people would understand it.

“And it’s worth saying: None of this is the fault of the reporters who work at local newspapers. I know from my own experience how deflating it is to rush out stories that will ‘do well online’ but don’t have anything to do with our core mission.

“The excitement I felt when I got my first job in journalism has slowly been replaced over time with sadness and the realisation that the career wasn’t what I hoped it would be. I fear for the trainees currently entering the industry, many of whom are recruited to work on ‘live’ teams where the expectation is to write eight or ten or twelve stories each day.

He added: “That’s why I was so excited when I saw The Mill launching in Manchester last year, and why I became one of its first paying subscribers.

“The Mill publishes lovely long reads about local stories and people and is pioneering a totally new form of local journalism: funded by paying members and focusing on thoughtfulness, nuance and building up the trust of readers.

“They have shown that there is an appetite for high-quality local news that isn’t driven by clickbait.”