A Scottish daily’s front page in support of the Italian national football team did not discriminate against English people, the press watchdog has found.

The Independent Press Standards Organisation has dismissed complaints about the splash, run by Newsquest daily The National the day before the Euro 2020 final.

The front page, pictured below, depicted Italy manager Roberto Mancini as William Wallace and declared him “our final hope”.

But the tongue-in-cheek splash by the pro-Scottish independence title, which is based in Glasgow, prompted a number of complaints under Clause 12 (Discrimination) of the Editor’s Code of Practice. 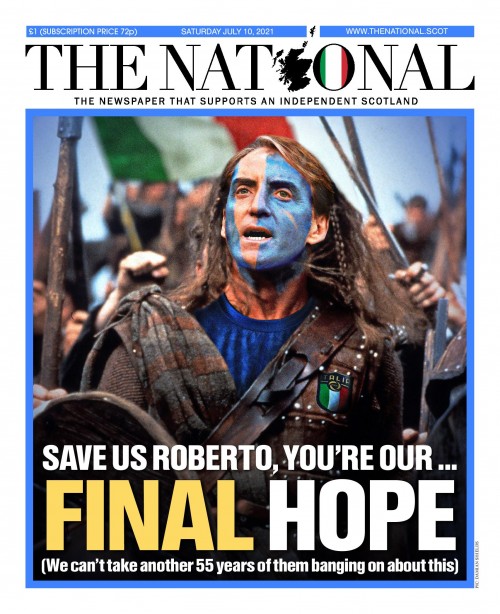 According to The National, the complaints have now been dismissed with complainants being told by IPSO: “Your concern that the article discriminated against English people in general did not relate to an individual and is not a characteristic protected by the Code.

“This meant that it did not engage the terms of this Clause.”

Complainants have been told they are entitled to review the rejection by Wednesday.

The National’s editor Callum Baird said: “Our Roberto Mancini front page was a massive hit – with the vast majority of people, especially those in Europe and football fans, understanding exactly what our intention was with it.

“Nobody would expect Rangers fans to support Celtic in a cup final or vice versa.

“As likeable as many of this England team’s players are, with the likes of Marcus Rashford doing a fantastic job of taking on the Tories, we simply couldn’t have handled another 55 years of the media and commentators banging on about it.

“The mock-up of Mancini as Braveheart was some classic newspaper humour and we’re glad so many people – including the man himself and captain Giorgio Chiellini – got a laugh out of it.”