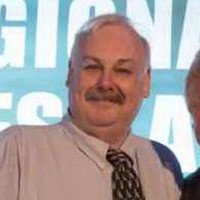 A former Regional Press Awards winner who worked for a group of weekly newspapers until recent months has died aged 54.

Tributes have been paid to Dave Evans, who served as West Ham United correspondent for Archant’s London titles until last year.

Dave, pictured, was named Weekly Sports Journalist of the Year at the RPAs for 2015 and was known as a go-to source for news about the Premier League football club despite national competition.

He was made redundant from Archant in 2020 and had suffered from poor health in recent years. Dave died on Christmas Day, which he was spending with family.

Said Jacob: “He was always keen to share his time with all of us as we were learning to ply our trade in the industry.

“I’m sure we were not the only three that have learnt from his knowledge and years of wisdom – especially his proofreading, where you’d never live down a mistake.

“But that was all because he wanted to make sure you didn’t make the mistake anymore, plus he enjoyed the office banter and had a good sense of humour.”

George, who now works for PA Sport, said: “He was a Recorder stalwart and despite the constant changes with a switch of focus from print to web, the rise of social media and the increasing popularity of podcasts and videos, Dave always stayed relevant and was a fantastic voice for the West Ham fans to follow.

“The ‘Bye Bye Boleyn’ supplement to mark the club leaving Upton Park in 2016 rightly received rave reviews with Dave almost singlehandedly producing all of the content.

“It was testament to him that a local newspaper covering a Premier League club remained one of the first places for accurate news and strong opinions despite the competition of nationals.

“It also says a lot for Dave’s personality that he was a popular figure amongst his fellow journalists and was hugely respected by hundreds of players, managers and staff members who have worked at West Ham during the last 15 years.

“Aside from being a brilliant writer with a penchant for fantastic intros and a superb interview style, he was a mentor for so many people at Archant like myself.”

Ned, who works for Reach plc titles including the Daily Mirror, Daily Star and Daily Express, also recalled Dave’s coverage of sports including athletics and bowls.

He said: “Anyone who worked alongside Dave is aware of how much of a privilege it was, and will also know how much of an impact he had on their careers.

“Sitting alongside a man of his experience and talent in my first full-time job in the industry helped shape my career and for that, Dave, I’ll always be grateful. May you rest in peace.”