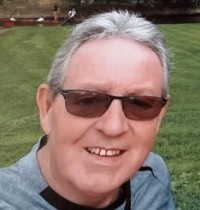 A journalist who served three regional dailies before serving as a national tabloid’s sports editor has died aged 72.

Tributes have been paid to Ed Barry, who worked for the Nottingham Post, Birmingham Mail and Manchester Evening News during his 43-year career.

His former colleague John Dillon described him as a “great newspaperman” in an obituary for the Football Writers’ Association.

John added: “But his sharp, lively London Irish mind was interested in so very much more about life.

“And he always knew what he was talking about, as often as not with a pint of London Pride in his hand and more than sometimes, with a healthily blunt expletive on the way, too.

“That is what made him such a good and passionate journalist and such a fine sports editor of The People between 1994 and 2000 – as well as such a great friend and lively, irascible companion.”

Ed, pictured, was born in Islington, London, to Irish parents and began his career on the Hornsey Journal in 1968.

He moved to Nottingham in 1972 and then on to Birmingham two years later.

He then freelanced for two years and also wrote for Warrington-based national daily The Post during its ill-fated five-week run.

He joined The People in 1990 and was sports editor between 1994 and 2000, at which point he had another three years freelancing.

Andy Dunn, chief sports writer of the Daily and Sunday Mirror, was employed by Ed at The People.

He told the FWA: “Ed and his number two, Ray Ansboro, formed a formidable partnership at the helm of People Sport. The key was healthy debate.

“Ed was always up for a debate about most things, not just sport. And while it could get heated, it would usually remain good-natured. Passionate but good-natured.

“He was very supportive of writers and it is easy to forget just how good The People sports section was. It is no exaggeration to say it was a go-to paper for footballers.

“At one point in Ed’s time as sports editor, the People was selling two million copies … and the sport had a lot to do with that.

“Most importantly, though, Ed was simply good company, great to share a pint with, and a great bloke.”

Ed died on 6 December after a short illness followed by a heart attack.

He is survived by Gail, his wife of 52 years, as well as their sons Kieron and Neil, and grandchildren Joshua, Kallan, Olivia and Noah.