Satchwell given lifetime achievement award as patch’s heroes are honoured

Legendary editor Bob Satchwell has been honoured with a posthumous Lifetime Achievement Award from his former newspaper.

The Cambridge News handed out its CambridgeshireLive Heroes awards on Tuesday, with its former editor Bob among the recipients.

Bob, who died earlier this year aged 73, edited the paper from 1984 until 1998 before taking over as the first executive director of the Society of Editors.

His daughter Ellie is pictured below receiving the award on his behalf, flanked by current editor, Richard Duggan, left, and David Bartlett, audience and content director for parent company Reach plc. 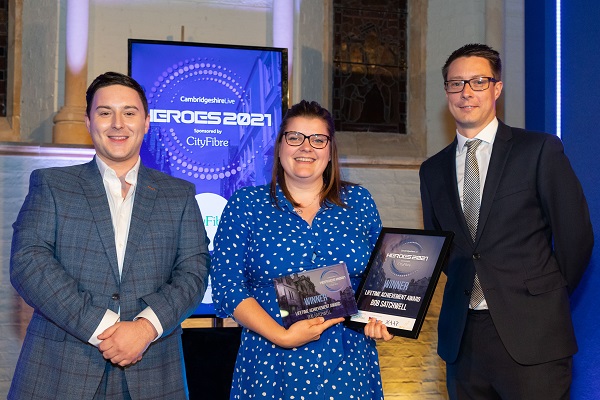 Presenting the award, David said: “Bob Satchwell edited the Cambridge Evening News as it was then from 1984 to 1998. He has been described as a “giant of the industry” – a title that is not an exaggeration by any means.

“During his tenure, the Cambridge Evening News became one of the most successful regional newspapers in Britain, winning six awards during his time at the helm.

“He was also a frequent broadcaster and speaker, debater and lecturer on media issues, press freedom, freedom of information, business ethics, leadership, business in the community and strategic public relations.

“He was on the board of several charitable groups and organisations, including Cambridgeshire Communities Foundation and the Joseph Rowntree Foundation Public Interest in Poverty Issues Advisory Board.

“We all owe Bob a huge debt of gratitude for the years he spent fighting for press freedom and for being a shining example that every editor wishes to emulate.

“It’s my absolute pleasure to present this award, and tonight I am delighted to say we have Bob’s daughter Ellie here to receive it on behalf of the family.”

The honour along with the other CambridgeshireLive Heroes awards were handed out in a ceremony at St Barnabas Church, in Mill Road, Cambridge.

The Lifetime Achievement Award was designed to recognise “special individuals who have selflessly helped others, whether in the workplace, an organisation, or in their community over a number of years.”