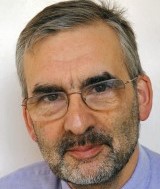 A former editor has urged readers of his old newspaper to “use it or lose it” after the title celebrated its 50th anniversary.

John Francis, who used to edit Stevenage-based weekly The Comet, has made the plea in a column to mark the paper being in business for half a century.

In his column, published last week, he paid tribute to the team he led at the paper for “putting their hearts into a real labour of love”.

John wrote: “It was a glorious Indian summer and I savoured every day of it.

“I’d be there still, if things had stayed the same – but they never do.

“I didn’t like fresh changes looming on the horizon, so I made a dignified retreat to make way for the next generation.”

John went on to urge The Comet’s readers to keep supporting the paper.

He added: “Times are tough for local news providers and they don’t look like getting any easier, which is a great shame.

“A strong regional press is important for all sorts of reasons, but many of those reasons don’t become apparent until a paper is forced to call it a day.

“Use it or lose it, people – the Comet has already shown it’s a survivor, but it can only carry on for as long as you want it to.”