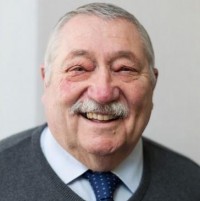 A serving regional press journalist and former editor of a daily newspaper has died suddenly aged 69.

Tributes have been paid to Andrew Martin, who edited the Worcester News during the 1990s.

Andrew, pictured, later moved to North Wales where he took on NWN Media’s coastal titles – including the Rhyl Journal, North Wales Pioneer and North Wales Chronicle, as well as the Denbighshire Free Press – in 2012.

He had planned to retiree around a year ago but continued to work for the titles, now owned by Newsquest, throughout the coronavirus pandemic.

Susan Perry, group editor for Newsquest North Wales, said: “All of Andy’s former colleagues at Newsquest, previously North Wales Newspapers, are shocked and saddened by the news of his passing.

“Andy was not just a great colleague but a good friend. He was a true newspaper man, and his work ethic and enthusiasm were an inspiration to us all. Our sincere condolences to his wife Sue, his family and friends.

“On a personal level I will miss my catch-up chats with him and his wise advice, encouragement and support.”

Suzanne Kendrick, coastal chief reporter, added: “Andy meant so much to so many people. He was the one who carried us during stormy weather, always wanting the best for his team and the papers.

“Andy meant a great deal to me. He gave me my first reporting job and for that I will always be grateful.

“He was highly respected and an expert in his field. He only wanted you to do your best and he instilled that passion, to take pride in your writing and what you were putting out to the community.

“Andy was committed to the papers and even when he was meant to retire, he couldn’t let go. When he said he was leaving I remember asking him not to go… ‘but it won’t be the same without you.’ Now it really won’t.

“He was such an important part of our little work family.”

Andrew began his journalism career as a junior reporter on the Banbury Advertiser before moving to the Banbury Guardian as a sports reporter.

He then joined Radio Oxford, where he covered football team Banbury United, before moving to become editor of the Malvern Gazette.

Andrew then moved to take the same role at the Evesham Journal and later, Worcester News.

He also worked for a spell as a sub-editor at the Birmingham Post and Mail before moving to North Wales.

Denbighshire Free Press reporter Arron Evans said: “Andy was an editor who really cared about all members of the newsroom and always enjoyed sharing a joke or two with the rest of us also – when he smiled, we all smiled along as he had an infectious laugh.

“I’ll always remember him telling me that I had a very sharp haircut on my first day in the office.

“He was stern when he needed to be, but always offered great guidance and listened to what others had to say.”

Andrew, who died suddenly on 4 February, is survived by wife Sue, 68, children Melissa, Adam and Nicholas and four grandchildren.