A regional editorial boss has demanded ministers act on political parties’ fake local newspapers after a fresh example of the practice was discovered.

Newsquest editorial director Toby Granville has urged Culture Secretary Nadine Dorries to put an end to the practice after sharing an image of the Liberal Democrat-produced Three Towns Gazette on Twitter.

The Gazette is described on its front page as being a “free newspaper from the local Liberal Democrats of the three towns of Bournemouth, Christchurch and Poole”.

HTFP shone a spotlight on the issue ahead of the 2019 General Election – with the Electoral Commission subsequently calling for “real change” on misleading party political leaflets. 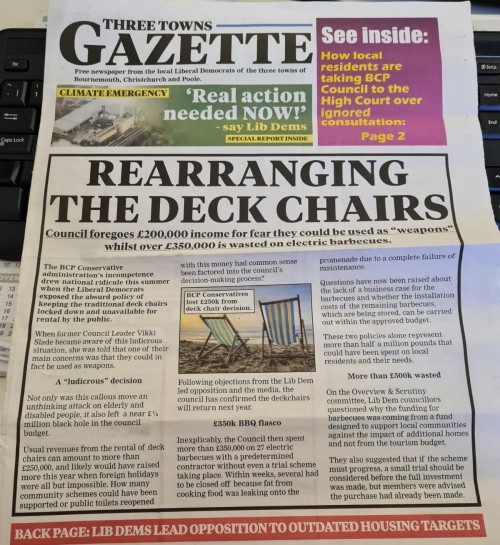 At the time, Toby warned the Lib Dems he would advise all Newsquest editors not to publish any campaign news unless it ceased the practice.

We further highlighted numerous examples of the tactic being revived by the same party earlier this year, ahead of elections across the country.

Posting on Twitter, Toby wrote: “So the Lib Dems are at it again with their fake newspapers misleading our readers by undermining the journalism industry and our trusted local news.

“Please can you find a way of putting a stop to this practice Nadine Dorries?”

In response to Toby’s post, former Worcester Lib Dem chair Paul Griffiths suggested any Government sanctions would violate Article 10 of the European Convention on Human Rights, which provides the right to freedom of expression and information.

Toby added: “It’s nothing to do with ‘freedom of expression’.

“It’s about your party’s ‘newspapers’ trying to get a political advantage by trading off the trust we have built up with our local communities over many decades – and in many cases centuries – by mimicking ours.”

Ahead of the elections earlier this year, the News Media Association launched a campaign warning voters not to be “duped” by political parties’ fake local papers.

Responding to Toby’s post, NMA chief executive Owen Meredith wrote: “These political publications, which are designed to fool readers into thinking they are independent local newspapers, have no place in our democracy.

“They undermine trust in both politicians and local news media and should be stopped.”

HTFP has approached both the Liberal Democrats and the Department for Digital, Culture, Media & Sport for a response to Toby’s comments.