Editor who was ‘true gent’ dies aged 89 after contracting coronavirus 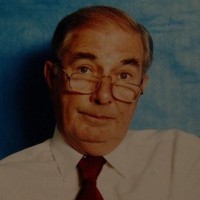 A former editor described as a “true gent” has died aged 89 after contracting coronavirus.

Tributes have been paid to Mike Colton, who edited the Peterborough Standard for 13 years.

Mike, pictured, later joined the Peterborough Telegraph and served as its features editor in the 1980s and 1990s.

“He was a true gent and a fine journalist.

“He was one of the old school and believed in the true values of journalism.

“Those who knew him recognised he had a great sense of humour.”

Mike began his career as a cub reporter on the Long Eaton Advertiser and later moved on to the Maidenhead Advertiser, where he met his wife Jean.

He also worked on other titles such as the Manchester Guardian and the Loughborough Monitor before moving to Peterborough in 1970.

He is survived by children Victoria and Chris, as well as grandchildren Oscar, Tom, Sadie and Edward.

Victoria told the Telegraph: “We were so lucky to have him as our dad. We will miss him terribly, he was so fun-loving and was a massive part of our lives.

“We are proud of all the writing we did and are pleased that he has left that as his legacy.

“He really came alive through his writing and you could see how truly well-read, clever and wonderful with words he was.

“He always loved a discussion and was never afraid to speak his mind but also has a high standard of integrity.”