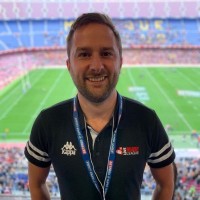 The editor of a national rugby league website has warned coverage of the sport could “die out” without an increase in local reporting.

James, pictured, made the comments in an editorial celebrating the 10th anniversary of another rugby league publication, Forty20 magazine.

He has worked with Forty20 in recent years, syndicating some of the magazine content through his website.

In his editorial, James wrote: “Without its independent media, together with a collection of incredibly dedicated and hard-working national newspaper journalists and a sadly ever-decreasing number of knowledgable and passionate local newspaper reporters, coverage of rugby league could die out.”

However, James has called for more local rugby league reporting across the regional press.

He told HTFP: “Clearly in rugby league territories, they aren’t going to be able to compete with Premier League football for clicks given the worldwide interest, and I would argue that getting coverage in local newspapers is critical for rugby league and many other sports.

“I have experienced the same when working in other sports like basketball, ice hockey etc – where one story in a local paper is actually very significant to them in interest.

“In many ways, rugby league is quite reflective of the attitudes towards media coverage.

“There’s this theory that you need big city and fashionable places to actually be successful, which may of course be right, but then that completely forgets about the so-called unfashionable places that still exist, but apparently will just be forgotten.”