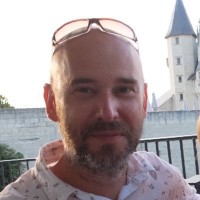 An editor has returned to take the top job at the weekly newspaper where he began his career.

Andy Veale, who edited the Hunts Post for eight years, has been unveiled as the new editor of the Stratford Herald following the departure of Richard Howarth.

Andy, pictured, began his career on the Herald in 1996 and later served as its news editor before working in senior roles at titles across the country.

Richard has taken up the role of marketing manager at Stratford-upon-Avon’s Shakespeare Hospice, having seen the Herald through a period of administration and a change of ownership.

The paper was purchased by joint venture company Stratford News and Media Ltd, headed by Edward Iliffe and Peter and Rory Fowler, in July last year.

Andy told HTFP: “Returning to the Stratford Herald is a bit of a homecoming for me – it’s where I started my journalism career and it’s also where I met my wife, Lisa, who was working at the newspaper to fund a gap year after finishing university.

“Since leaving Stratford to travel the world with Lisa, I’ve been lucky enough to work with some amazing teams on daily and weekly titles across the country but have always maintained links with Stratford-upon-Avon and an ambition to one day edit the Herald.”

He added: “Last year was exceptionally hard for the Herald team after the former owners, George Boyden & Son, went into administration, adding to the already tough situation of having to work through coronavirus lockdowns and see colleagues furloughed or made redundant.

“The entire team, under former editor Richard Howarth, has worked so hard to continue publishing a newspaper, switching from broadsheet to compact and putting in long hours to serve our South Warwickshire communities.

“Now under the ownership of Stratford News and Media Ltd, with Edward Iliffe and Peter and Rory Fowler behind the business, we have the chance to come out of this latest lockdown in a strong position and to continue to grow the Herald from our new offices in the centre of town.”

Andy left the Herald in 2000 and, after spells with the Bath Chronicle, BBC and Sutton Guardian, became editor of the Hunts Post in 2006.

He was also responsible for the Post’s Archant sister titles Saffron Walden Reporter and Dunmow Broadcast between 2011 and 2014.