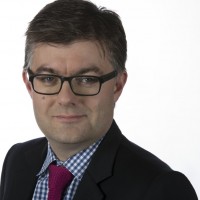 The new editor of The Scotsman has introduced himself to readers in an open letter saying the job was “impossible to resist.”

Former BBC executive Neil McIntosh was unveiled as editor of the 204-year-old title earlier this year in the first major editorial appointment by the paper’s new owners, National World.

Neil, pictured, has now taken up the role at the paper where he began his career in journalism in the 1990s.

He introduced himself to readers in an open letter published on Saturday.

Wrote Neil: “Not all about The Scotsman is new to me. I started my career here in the 1990s, writing a weekly column about the internet, and also worked on the Edinburgh Evening News.

Subsequent travels saw me work for the Guardian, The Wall Street Journal and the BBC. But with The Scotsman and its sister titles under the new, ambitious ownership of National World, I leapt at the chance to return.

“As Scotland emerges from the pandemic and makes vital decisions about its future, it was impossible to resist the opportunity to ensure The Scotsman pursues vigorously its 204-year-old mission to “exhibit, as much as possible, the very shape and pressure of the times”.

“The last few days have been busy, and full of contrasts. A constant has been the sadness at the Duke of Edinburgh’s death, and preparation for his funeral today. But there has also been the happy anticipation of the relaxation of lockdown across Scotland, and the growing pace of vaccination here. Hope springs eternal, this spring.”

At the time of his appointment, Neil was managing editor at BBC Online, and previously held roles on The Wall Street Journal and The Guardian.