A regional daily has broken online page view records after live blogging all 38 days of a child murder trial.

The Bradford Telegraph & Argus ran the real-time blog for the entirety of the Star Hobson case at Bradford Crown Court.

Savannah Brockhill was found guilty of murdering Star, the 16-month-old daughter of her partner Frankie Smith, at her home in Keighley.

All bar one day of the trial was attended by T&A reporter David Jagger, who ran the live blog. 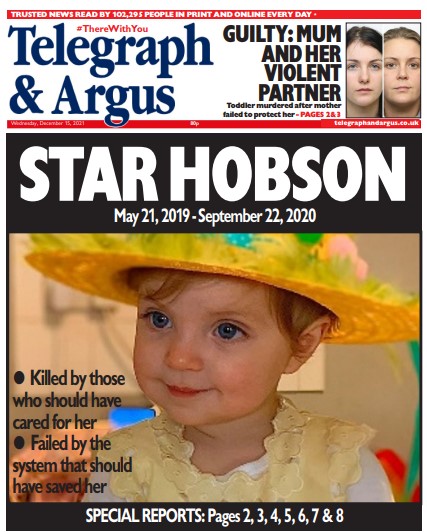 The T&A focused on Star on its front page this morning, pictured above.

Editor Nigel Burton told HTFP: “The Star Hobson trial has been one of the most difficult and upsetting cases the T&A has covered for many years.

“At times, the blog was hard to read, but we felt it was important the evidence be reported in full, not least because serious questions now need to asked about safeguarding issues and how society keeps vulnerable children safe.

“Dedicating a reporter to cover every moment of such a long-running case wasn’t an easy decision, but this tragedy is likely to have national ramifications.

“Our readers have a right to expect the T&A to produce the best coverage and I am confident we did.

“I’d like to pay tribute to the amazing work done by David Jagger, who live blogged all but one day of this case.

“At times it must have been difficult listening to the evidence and reporting on it in real time, but he did a tremendous job. He is a credit to the T&A.”

Smith was found guilty of causing or allowing the death of a child.

The pair will be sentenced today.