A regional daily has run a special investigation examining the “far-reaching consequences” of knife crime on its patch.

The South Wales Echo has looked at how the issue has affected Cardiff, with reporter Ffion Lewis interviewing families left bereaved due to knives.

The investigation provided a splash for the Echo on Monday, pictured below.

Editor Tryst Williams told HTFP knife crime had been a “depressing constant in the region’s news agenda” since he took over at the Echo five years ago. 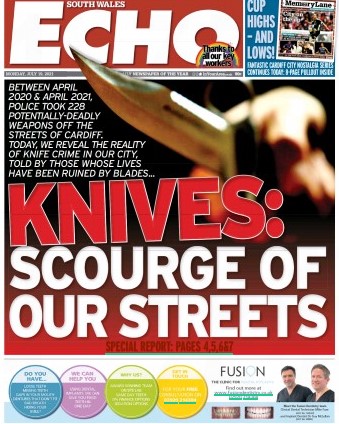 He said: “Cardiff’s a vibrant capital city known for its friendly welcome and yet, like cities across the UK, we find ourselves reporting on the tragic consequences of knife crime far too often.

“Just a few months ago, we covered the shocking murder trial of a 17-year-old who’d been chased by gang into a dockyard, stabbed, and left to die.

“Against this background, reporter Ffion Lewis looked at the far-reaching consequences of stabbings.

“She did this through interviewing bereaved families – including a man who went on to meet his brother’s killer in prison; she told the story of a man who’d been stabbed in an attempted street robbery; she spoke to the mum of a teenager who witnessed a fatal stabbing outside his house, and how this had a traumatic impact on his life; and she caught up with community leaders attempting to tackle the issue.”

Ffion added: “The reaction since publishing has been really positive.

“Lots of the people featured in the article were anxious about opening up and being vulnerable but say the piece has raised awareness to the reality of the problem in Cardiff.

“Thank you to each and every person that bravely shared their story with me.”