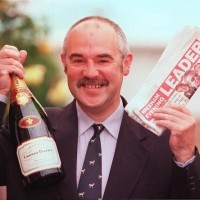 A regional daily’s horse racing correspondent who continued to write for the newspaper from his hospital bed has died aged 68.

Tributes have been paid to Arthur Shone, who had worked for North Wales daily The Leader since the late 1980s.

Brought up in Wrexham, he also made regular contributions to Shropshire Star, Cheshire Life magazine and BBC Radio Wales.

Arthur, pictured, died at the weekend after living with cancer for the past year.

Cheshire-based horse trainer Donald McCain told The Leader: “Arthur was a gentleman and never missed ringing me before a Bangor meeting.

“He always had a smile and a pleasant word and will be sadly missed.”

Leader sports editor Nick Harrison said: “He was proud of the fact that he hardly ever missed a meeting at Bangor.

“He was just as pleased with his record of being the top tipster at his home course.

“Donald McCain was right calling Arthur a gentleman. He was even writing previews and round-ups from his hospital bed – and that’s how much it meant to him to give his loyal following of Leader readers the best bets he could for Bangor and Chester.”

One of Arthur’s last requests was to have his ashes scattered at Bangor-on-Dee Races while Jeannie Chantler, general manager at the course, has said a memorial race in his honour will be run later in the year.

Arthur is survived by his partner Elizabeth Johnston, sons Kelvin and Geraint and grandchildren Bobi, Aiden, Morgan, Arwen and Hafina.

Ms Johnston said: “Arthur made Liverpool his home for the last 20 years. He embraced the people, the sense of humour and the friendliness of its citizens.

“In return the people in Liverpool who were lucky to meet Arthur found a warm, passionate and positive man who enjoyed his company particularly when the subject was about his love of horse racing.

“You will always be in the hearts and memories of the people of Liverpool.”

Eldest son Kelvin added: “To everyone else he was Arthur from the horse racing or Arthur from the paper, but to me he was dad and I couldn’t have asked for a better or more supportive one, he was always there when I needed him and it was always with pride that growing up I was referred to as Arthur’s lad. I will miss him so much.”