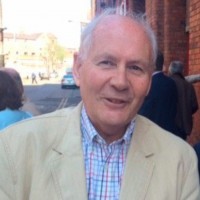 A regional daily’s former managing editor has died aged 73 after a short illness.

Tributes have been paid to David Neely, who held the role at the Belfast Telegraph during a career in which he also served as assistant news editor at the title.

David, pictured, was also motorbike correspondent at the Bel Tel, writing a weekly column on the subject during his time there.

Former editor Martin Lindsay has led the tributes, describing David as “a first-rate journalist” and a “true professional.”

He told the Bel Tel: “David and Norman Jenkinson and I were on the news desk during some of the worst years of the Troubles.

“During those difficult years, to say the least, David played a huge role in ensuring that we delivered the best possible service for our readers at a time when the news landscape was changing almost hour by hour, and sometimes as bombs rocked our Royal Avenue building to its core.

“After his heart attack, he kept me abreast of his condition by text from his hospital bed. He always had a ‘glass half full approach’ to his illness, and he showed a steely determination to get back on his feet and he was determined to return home to his family and friends.

“I am so saddened that he did not get the happy ending that he, and all those who knew and loved him, had so desperately hoped for.”

David began his career on the Coleraine Chronicle as a trainee reporter before moving to the News Letter in Belfast, later switching to become a general reporter at the Bel Tel.

He is survived by his wife Anne, daughters Lisa and Fiona, grandson Atticus and brother Alastair.

David outlived by his first wife Gwen and by his brother Philip, a member of the Merchant Navy who was lost at sea in 1989 in the Gulf of Mexico.

Alistair told the Bel Tel: “David was always somebody I looked up to. He was a great brother who helped to guide me through life.

“He was a very well-known and popular person, and he had a wide circle of friends.”