A regional daily has renewed a plea for one of its patch’s sporting stars to be knighted for his charity work.

The Yorkshire Evening Post has repeated its demand for a knighthood to be bestowed upon former Leeds Rhinos rugby league player Kevin Sinfield.

Mr Sinfield has raised almost £4m in aid of Motor Neurone Disease research since his former teammate Rob Burrow was diagnosed with the condition.

In his latest challenge, Mr Sinfield ran 101 miles from Leicester, where he is a coach at rugby union team Leicester Tigers, to Leeds in 24 hours. 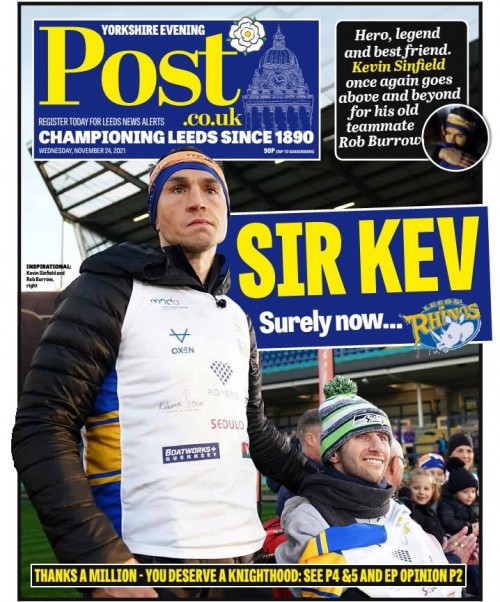 The YEP previously called for a knighthood for Mr Sinfield last December, when he raised £2.7m after completing seven marathons in seven days.

The Leeds-based daily’s latest call appeared on its front page on Wednesday, pictured above.

In an accompanying comment piece, editor Laura Collins wrote: “Sir Kev – as he is affectionately known by fans – has raised hundreds of thousands of pounds already in his latest effort.

“Everybody needs and deserves a friend by their side at the darkest of times like Sir Kev.