A regional daily has paid homage to movie classic The Great Escape on its front page after its local football team avoided relegation.

The Burton Mail paid tribute to Burton Albion by parodying the 1963 wartime film after the club’s status in League One, English football’s third tier, was confirmed.

Albion, nicknamed The Brewers, had been languishing at the bottom of the table prior to the arrival of current manager Jimmy Floyd Hasselbaink took charge of the club for a second time on New Year’s Day.

The club have since climbed to 17th in the division and have avoided relegation with three games to spare, prompting the celebratory splash on Monday. 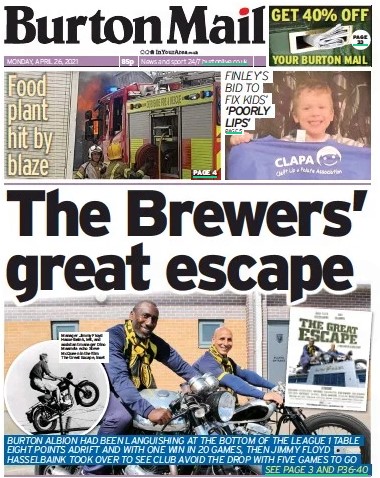 Mail editor Julie Crouch told HTFP: “The idea for page one was a joint one but it was sub-editor Charlie Brown who designed the front and made it come alive.

“The Burton Mail is happy and relieved to see Burton Albion stay up and live to fight another day in League One.

“The club’s rise from non-league to Championship side and now League One has been nothing short of a miracle, and we’ve been there to report on it every step of the way.

“Here’s to pushing for promotion next season.”