Daily news editor who ‘fought for the underdog’ dies aged 85 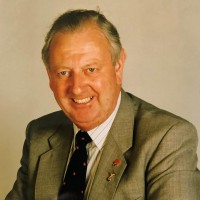 A regional daily news editor known for his mentoring of young reporters has died aged 85.

Tributes have been paid to Ray Horsfield, who ran the newsdesk at the Bournemouth Echo and later served as its associated editor.

Ray, pictured, also worked on the Lancashire Telegraph and the now-defunct Burnley Evening Star during his career.

In an obituary for Ray, he wrote: A proud Lancastrian, known for ‘speaking plainly’ Ray often fought for the ‘underdog’ and took many a young reporter under his wing.”

Lancashire native Ray began his career as a cub reporter in the county before completing National Service with the Royal Air Force.

In 1956 Ray secured a job with the Lancashire Evening Telegraph, becoming the district chief reporter for Burnley.

In 1965 he was appointed the news editor of the Evening Star, where he remained for 14 years before moving to take the same job in Bournemouth.

He was made associate editor after a decade as news editor, and later he launched and ran a Gardeners’ Echo supplement and Prime Time, a standalone publication aimed at the over-50s.

Ray retired in 2000 but continued as a freelance writer, and also worked part-time for the local tourism office in the New Forest.

He was married to Marjorie and had four children.

Andy added: “His journalistic legacy was passed on to three of his children. Christopher worked for the Advertiser series in Southampton, sadly he died in 1993.

“Andrew was a photographer for the Advertiser series and the Daily Echo and Michaela was a newspaper librarian and nostalgia writer.

“His eldest child, Belinda, was an art teacher in Petersfield and now runs her own workshops.”

In his later years, Ray lived with dementia and died at Bournemouth Hospital from pneumonia on 10 January.