A regional daily has used its front page to launch a post-season survey of football fans on its patch.

The Sunderland Echo has launched the ‘Big SAFC Survey’ for supporters of Sunderland AFC.

The survey’s launch comes after Sunderland failed in their bid to get promoted from League One, English football’s third tier.

On its front page yesterday, pictured, the Echo asked readers who was to blame for the failure and which areas for improvement the club should prioritise, among other things. 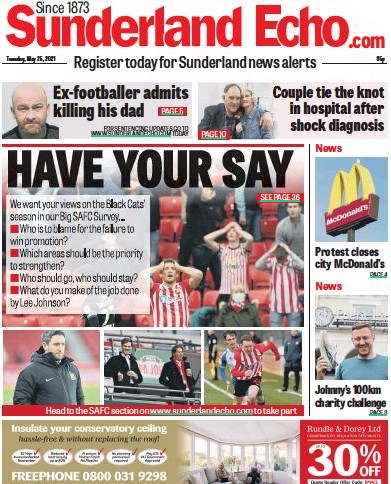 In a column launching the survey, the Echo’s assistant editor (sport) Richard Mennear wrote: “Sunderland are having to face up to the reality of a fourth season in League One following the 3-2 aggregate loss to Lincoln with 16 players out of contract this summer another major rebuild is on the cards.

“Today we are launching our annual Big SAFC Survey and we want to know your views on the season just gone, what next for Sunderland and the type of players they should be targeting this summer.”

He added: “The Big SAFC Survey launched today and will run until Friday morning.

“We will then look to bring you the results over the weekend as Sunderland reflect on how they can improve, while also looking to quickly move on with the major rebuild that is needed.”