A regional daily has landed an “exc-loo-sive” with the builders of a snowman which has been caught reading a newspaper on the toilet.

The snowman, called ‘Loo-ie’, was created by brother and sister Chris and Annie McCormick to look as though he is reading a copy of the Paisley Daily Express while using the bathroom.

The sculpture has “drawn a steady stream of visitors” since it was built on Tuesday, according to the Express, prompting the newspaper’s head of news Stephen Houston to track down its creators for interview.

The resulting story made the front page of yesterday’s edition, pictured below. 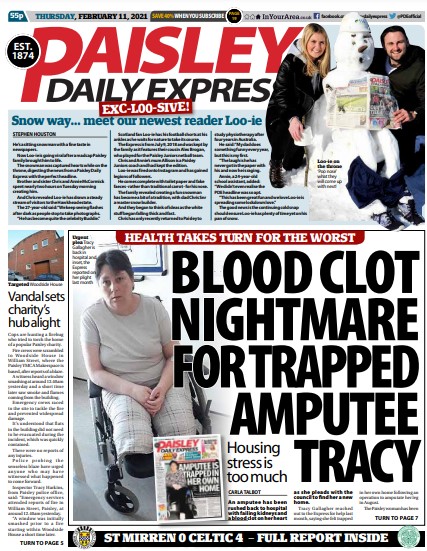 Stephen told HTFP: “I’ve always loved a good exc-loo-sive and delighted to see we’ve added a new, albeit temporary, reader during the pan-demic.

“The lockdown has been a long haul for everyone and our readers need some light-hearted stuff as much as the journalists on our paper.

“Under editor Gavin McInally, we are having to churn out six papers a week, not an easy task as HTFP readers will only too well realise.

“So when a good contact flagged Loo-ie up to me it was manna from heaven.

“Our readership has gained one as long as temperatures stay on the cool side.”

The copy of the Express held by Looie was from 9 July 2018 and was kept by the McCormick siblings as it featured their cousin Alex Brogan, who played for the Paisley Juniors netball team.

Fittingly the front page headline was ‘Out in the Cold’.

Annie, a 24-year-old school assistant, told the Express: “We didn’t even realise the PDE headline was so apt.

“This has been great fun and we love Loo-ie is spreading some lockdown love.”