A regional daily journalist has failed in his bid to eat the “world’s hottest Christmas curry”.

The Birmingham Mail’s Andy Richardson attempted the ‘Turkey Inferno’ challenge at the Dilshad restaurant, in Cannock.

The turkey dish is recorded at six million on the Scoville scale, which records the heat of chillies, and Andy had to sign a disclaimer before tucking in.

In a first-person piece about the experience, Andy said he began to believe it “really could be the last curry I ever ate”. 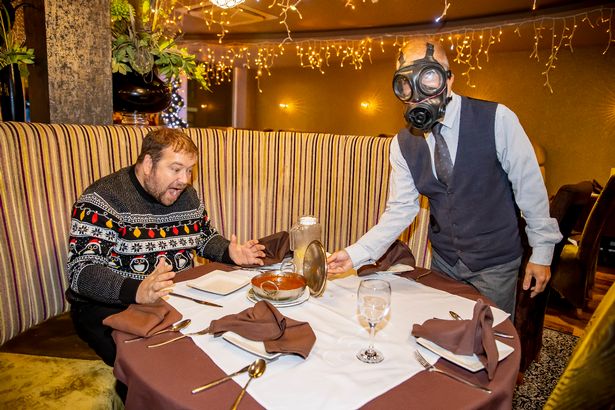 He wrote: “The heat of the curry doesn’t hit you until a few seconds into the first bite. But then it feels like molten lava bubbling in your chest and rising up into your throat until you feel like you could breathe fire.

“After two minutes my tongue felt like it had been burnt in an oven and my throat felt like I had swallowed razor blades.

“Don’t get me wrong it is so tasty but every mouthful is just too painful. After about six pieces of turkey, two jugs of water and a bowl of yoghurt, I was defeated. I had bitten off more than I could chew.”

“With my head lowered in shame and with the sound of Johnny Cash’s hit Ring Of Fire playing in my head I trudged out of the Dilshad a defeated man.”

Andy is the latest regional journalist to attempt a chill-eating challenge following a similar incident in 2014 that put two journalists from Brighton daily The Argus in hospital.

Current Argus editor Arron Hendy, who was then assistant news editor, and trainee reporter Ruari Barratt had to be taken by ambulance to the Royal Sussex County Hospital after taking just one bite each of what was believed to be the hottest burger in the country.