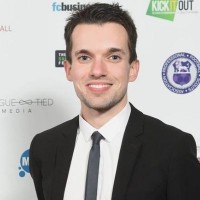 A regional daily has hit out at a football manager after print journalists were barred from asking him questions.

Newcastle daily The Chronicle was among the titles affected by Newcastle United’s decision to cut short a press conference with their manager Steve Bruce yesterday.

Ahead of the conference, reporters were informed there would not be a separate section for the written media as normal and only broadcast rights holders – Sky Sports, Premier League Productions, BBC Sport and BBC Look North – would be allowed to ask questions.

Chronicle Newcastle United writer Ciaran Kelly, pictured, has criticised both the club, nicknamed the Magpies, and Mr Bruce in a comment piece about the experience.

Ciaran wrote: “As well as usually giving newspapers their own section, Newcastle also afford additional time to The Chronicle, which, to be fair, they don’t have to.

“But the idea of preventing written journalists asking questions? I’ve never come across that – and it’s not a good look.

“Regardless of how I felt about it, it was easy to put two and two together: the Magpies have circled the wagons following some bruising criticism.

“However, if there is a feeling within the club that the coverage has been too harsh, well, what do they expect reporters to write given the dross that has been served up of late?”

United have so far lost every single game they have played in 2021.

The Chronicle has previously faced access issues with United, having been banned from press conferences and matches between October 2013 and December 2014.

Ciaran added: “To his credit, Bruce has always answered questions put to him – supporters may not necessarily like his responses – but the 60-year-old’s vow on Monday to ‘never shy away’ was rather ironic.

“Bruce, of course, has not helped himself with his comments in the written section of his pre-match press conferences of late when he is pushed a little further, and you just wonder if this was an exercise in self-preservation ahead of a huge game.

“After declaring that the ‘gloves were off’ and that he was going to do it his way after his side’s ‘absolutely s****’ performance at Sheffield United, Newcastle lost 3-0 at Arsenal.

“Then, just a week later, Bruce referenced the ‘mighty Rafa’ (a reference to previous manager Rafa Benitez), unprovoked, before the 2-0 defeat at Villa.

“There will be no such headlines ahead of the visit of Leeds but Newcastle’s decision to gag written journalists told its own story.”

Newcastle United declined to comment when approached by HTFP.