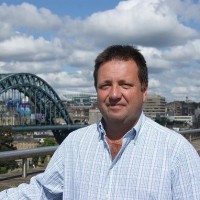 A regional daily editor who went on to run a city council’s public relations operation has announced his retirement.

Paul Robertson has announced his decision to “log off from corporate life” at the age of 55, having served as Newcastle City Council’s head of communications and engagement since 2018.

In a farewell post on LinkedIn, he recalled how in 1984 his careers master had told him he “would never get into journalism with my background”.

Paul, who left The Chronicle in 2011, added: “As the son of a miner and nurse from Ashington I am delighted to say I proved him completely wrong.

“I have had a fabulous career, worked with brilliant people, being part of as well as leading supportive, talented teams.

“Editing two of the country’s biggest newspapers, being editorial director for the North East and leading council communications in the wonderful city of Newcastle has been a privilege and an honour.

“I am now in the fortunate position to be able to spend more time with my loved ones, on the golf course and away from the stresses of work, but I will certainly miss the incredible variety of challenges thrown up on a daily basis and even more so my colleagues and friends.

“Knowing me, I will probably still be tempted to do some consultancy or non-executive roles in the coming weeks, but for now I sign out and say a huge thank you to everyone I have worked with over the years.”