A regional daily wants to bring an international sporting event to its patch after one of its columnists landed an exclusive on a bid for it.

The Birmingham Mail is calling for the Invictus Games to be brought to Birmingham in 2025 after a bid by Birmingham City Council for the Games was revealed by sports presenter Gary Newbon in his weekly column for the newspaper.

Wounded, injured and sick former and current servicemen and women compete across a variety of sports at the Games, which have been held four times across the world since 2014.

The Mail splashed on the campaign’s launch yesterday, pictured below. 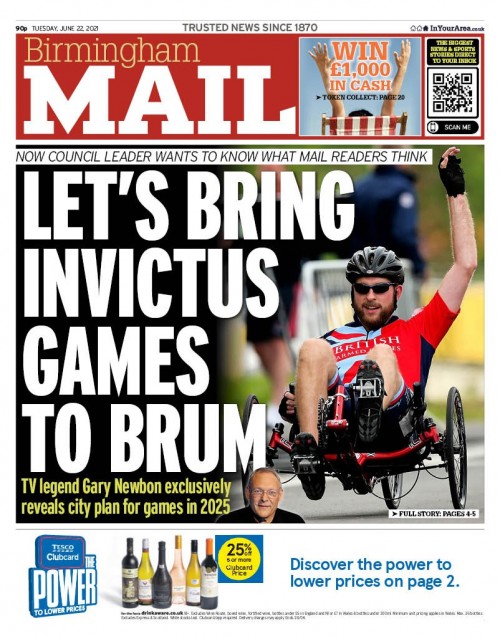 Editor Graeme Brown wrote in an accompanying editorial: “The Invictus Games is an international sporting event for wounded, injured and sick servicemen and women, both serving and veterans.

“It has become a huge source of inspiration – not only to those in the forces but to everyone in the country – a huge celebration of talented people who just refuse to be stopped.

“Next year, the eyes of the world will be on Birmingham when the Commonwealth Games rolls into town – and the city will shine brightly.

“People will come to a city with great sports facilities, return to superb hotels, enjoy a choice of wonderful bars and restaurants – but more than all of that, they will enjoy a Brummie welcome.

“It will be a showcase for a city which has much to show – and a reminder to everyone (Brummies included) that it’s where world-class things can happen.