Young readers get chance to quiz Johnson on climate change

A regional publisher is giving younger readers a chance to quiz Boris Johnson in Downing Street about climate change.

JPIMedia is aiming to “give children a voice” ahead of the United Nations’ COP26 climate summit as part of the publisher’s partnership with children’s newspaper First News.

First News is inviting children to submit questions and videos for a climate change press conference exclusively for children at Downing Street.

Every child that gets involved could be invited to the Number 10 conference or have their video message included, while many of the messages and ideas will be selected to feature in First News and across JPIMedia’s portfolio. 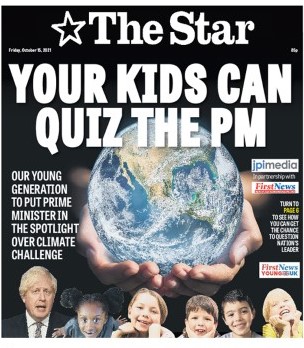 The campaign was promoted by Sheffield daily the Star

JPIMedia has promoted the campaign on the front pages of a number of its titles in recent days.

David Montgomery, executive chairman of JPIMedia owner National World, said: “JPIMedia is thrilled to be supporting the First News campaign to give children a voice and to be heard at the highest level on the issues that matter most to them, one being climate change.

“We look forward to continuing our collaboration with First News, working together on a number of campaigns that put children at the forefront.”

JPIMedia recently teamed up with First News to launch a weekly children’s news page across its portfolio of regional papers.

First News editor in chief Nicky Cox said: “The world needs its leaders to take action NOW before it’s too late to pull back the Earth from the brink of devastating effects caused by climate change.

“We are proud to give children a voice because it is their generation, and those that come after, who will be the most affected.

“They need to have a voice in the conversation around actions that must be taken so that they can be agents of their own future.”