An actress and singer has backed her hometown daily’s bid to save a leisure centre she grew up visiting.

Billie Piper has lent her support to the Swindon Advertiser’s campaign to save the Wiltshire town’s Oasis leisure centre, which has been closed since November.

Operator GLL cited Covid-19 and running costs for its closure, but the Advertiser is calling for the facility to be declared an asset of community value.

The Doctor Who actress, who also had three UK number one singles as a teenager, told the Advertiser it would be “heartbreaking” if the Oasis was allowed to close for good. 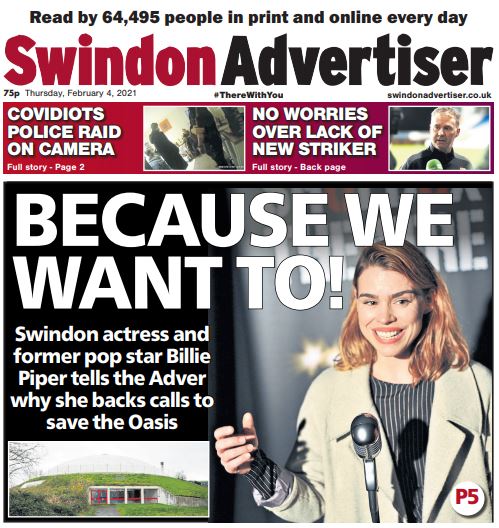 Her support prompted the Advertiser to run with the headline ‘Because we want to!’, the name of her first number one hit, on its front page on Thursday, pictured above.

Ms Piper told the newspaper: “It’s such a crucial part of the Swindon community, providing a place for people of all ages to exercise and have fun and make their own memories.

“To permanently lose this iconic local landmark would be heartbreaking for the community, some of whom rely on the space for their physical and mental health, and also for the loyal employees who will lose their jobs.”

Speaking to HTFP, Advertiser editor Pete Gavan said: “It was brilliant to get the support of a Swindon legend.

“We’ve been running the campaign to help secure the future for the Oasis since the closure was announced late last year.

“The Oasis is hugely important to the Swindon community and has been for decades and we’ll keep pushing until a solution is found for its doors to open again.”