Daily bids to save leisure centre which gave Oasis their name

A regional daily has launched a campaign to save the leisure centre which gave rock band Oasis their name.

The Swindon Advertiser is calling on readers to help get the Wiltshire town’s Oasis leisure centre reopened after operator GLL announced in November it would not be reopening.

GLL cited Covid-19 and running costs for its closure, but the Advertiser is calling for the facility to be declared an asset of community value.

The centre is known for giving the Manchester band their name after singer Liam Gallagher saw the venue listed on an Inspiral Carpets tour poster. 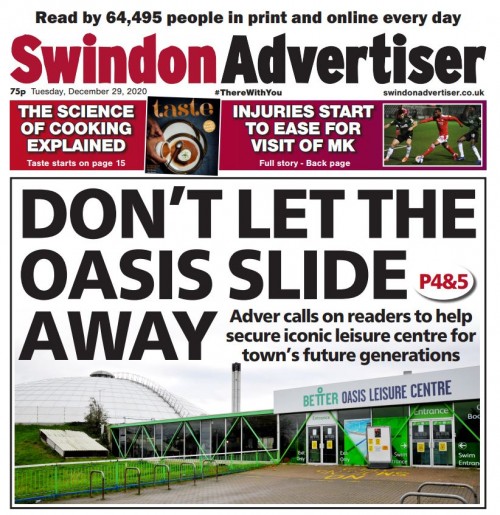 The campaign’s launch provided a splash for the Advertiser, which ran with the headline ‘Don’t let the Oasis slide away’ – a reference to the band’s 1994 song ‘Slide Away’.

Advertiser editor Pete Gavan said: “If there’s one thing we’ve learned this strange and terrible year is the importance of physical activity and health.

“We can understand why an organisation like GLL might think it’s too hard to make a profit from it with lockdowns and the extra costs of keeping it clean and the necessity for fewer customers at a time – but the greater need is with the people of Swindon.

“For many people in this town, the Oasis is vital – a place to be active, to have fun, to get away from life’s day-to-day pressures.

“If you want to see it open again, then it’s up to all of us – get involved, and make your voice heard.”