An editor says a long-serving parliamentarian’s decision to reveal her retirement in his newspaper is “testament” to the title’s work.

Linda Fabiani, Member of the Scottish Parliament for East Kilbride, used the East Kilbride News to announce her departure from frontline politics after 20 years of service.

Editor Fraser Wilson told HTFP the fact that she came to the paper to do so “shows that we are doing our job right”. 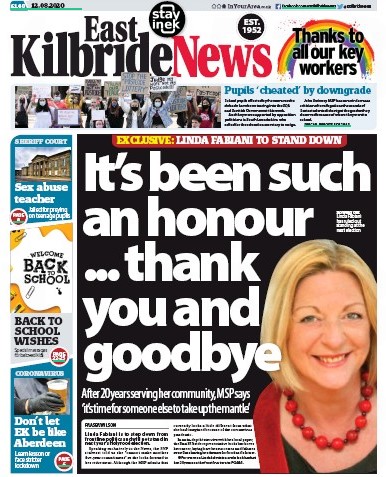 He said: “The importance of maintaining good relationships as a journalist is paramount in setting yourself and your title apart from competitors.

“It is the difference between being first past the post and an also-ran. And none more so than with elected members.

“Whether you agree with their politics or not, they represent your community and readers, so it is of the utmost importance that you nurture your working relationships with them.

“Linda remains a fantastic representative for her constituency and someone who appreciates the old ways of working, as well as embracing new methods.

“I think it’s testament to how we have worked together that she offered us first refusal at an exclusive and we are delighted that she wanted it to be us that broke the news of her retirement.”

Ms Fabiani, who became an MSP in 1999, will not be seeking re-selection from the SNP ahead of next year’s Holyrood elections.

Fraser added: “In my opinion, it is only right that her local paper was first with this news and speaks volumes of the relationship we have with her.

“We pride ourselves on representing our community as best we can with hard-hitting crime and court news, as well as reporting on the figures and matters that count – that locals care for, but nationals may not.

“This just so happened to be a local story with a national impact.

“The fact Linda came to us shows that we are doing our job right and that we have nurtured that relationship. We wish her all the best for her well-earned retirement.”