Weekly polls readers on whether patch should remain County Town

A weekly newspaper has polled readers on whether its patch should retain County Town status after the departure of a number of high-profile organisations.

The Kent Messenger has questioned whether Maidstone should retain the accolade after covering Kent Police’s unexpected announcement that it would be leaving its headquarters there.

Both the 36 Engineers’ Army Regiment and Kent County Council have also decided to abandon historic town centres bases in Maidstone in recent times – although the latter organisation plans to move into a new £50m headquarters alongside the borough council on land opposite their current building.

The latest news prompted the Messenger to posed the question “What next?” on its front page, with the poll being launched on its Kent Online sister website last week. 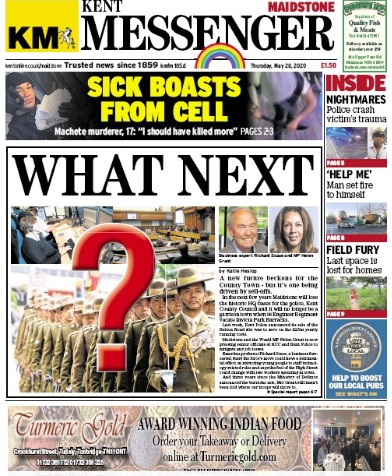 Denise said: “In isolation, the unexpected announcement that Kent Police intends to leave its Maidstone HQ would be a blow, but not necessarily send shockwaves.

“However, it comes on the back of several such decisions to abandon town centre bases from 36 Engineers’ Army Regiment and Kent County Council, leaving questions about the borough’s proudly-held County Town status.

“We asked our readers across the county to vote on which town (or city in the case of Canterbury) they thought merited the title.

“We’ve had just under 2,000 votes so far, with the largest percentage (33pc) opting for Canterbury, closely followed by 27pc for Maidstone, 8pc Ashford, 7pc Rochester, 5pc Tunbridge Wells and the remainder scattered among the other contenders.

“No doubt it’ll now be a battle between myself and the Canterbury-based Kentish Gazette editor Joe Walker for bragging rights.”