Weekly in fight to save historic building from demolition

A weekly newspaper is fighting to save an historic building on its patch from demolition.

The West Sussex County Times has devoted its front page to a campaign to stop Horsham’s Drill Hall from being replaced by housing.

The Drill Hall was built for the local Battalion of the Royal Sussex Regiment in the 1920s and later handed over to Horsham District Council, and has since been used by a number of local organisations for a variety of events.

The County Times splashed on the campaign’s launch last week and a meeting on the building’s future is due to be held tomorrow. 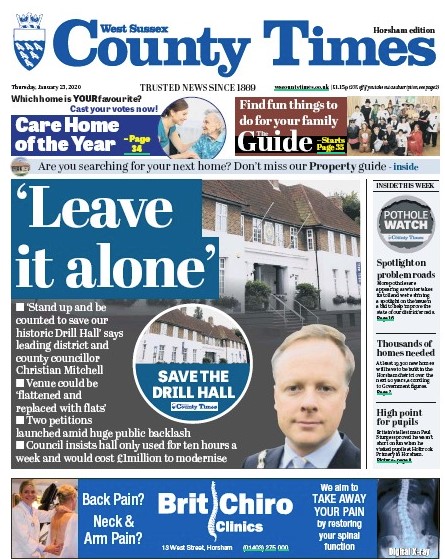 County Times editor Gary Shipton told HTFP: “The Drill Hall is not only an historic and much loved Horsham town centre building, it has been a central community point since the district council released the Old Town Hall as a restaurant.

“In tough financial times, we absolutely understand why the council would want to evaluate the future of the Drill Hall, especially given the maintenance costs, usage levels, and the opportunity of a new centre.

“But it is clear from the huge reaction we have received from readers – both directly and on social media – that its location and history make the Drill Hall a ‘must keep’ facility and it’s right that we campaign to secure it.

“With the appropriate investment and support from townsfolk there is no reason at all why the hall should not regain pride of place as one of Horsham’s most important community assets.”

A meeting on the proposal has been deferred, with a council spokesman telling the County Times: “It has been agreed that the proposal regarding Highwood Community Centre and the Drill Hall will now be discussed at a cabinet meeting on 30 January, not on 23 January as originally planned.

“This will enable further discussion following the level of public interest in this particular proposal.”