A weekly newspaper has launched a front page plea for investment in a bus station which is “an assault on the senses”.

The Kent Messenger has launched a campaign for the “ugly boil” of Maidstone bus station to be transformed into a transport hub “fit for the 21st century”.

The Messenger wants to see more private investment in the site from large firms which operate nearby.

The plea came on the Messenger’s front page on Thursday, pictured below. 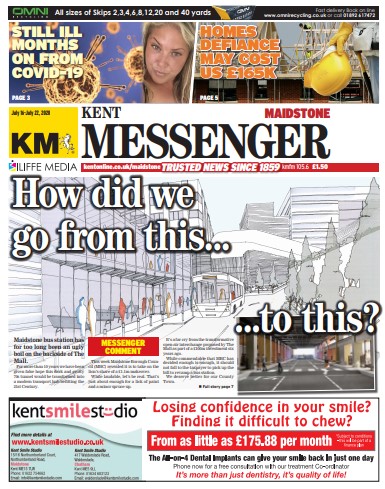 Editor Denise Eaton told HTFP: “This concrete carbuncle is, quite frankly, an assault on the senses and doesn’t offer the greatest first impression for anyone alighting in the town centre.

“It is, as we said in our comment piece, an ugly boil on the backside of The Mall shopping centre – and needs lancing once and for all.

“We’ve been promised various facelifts for more than 13 years, the last being in 2014 when its transformation formed part of a £100m investment by The Mall owner’s Capital and Regional.

“That sum was later revised down to £5m which was spent on much-needed improvements to The Mall shopping complex with the bus station once again the Cinderella of the spending allocation.

“We have revisited content on this dank, dismal and depressing area often. Two years ago we secured another ‘people power’ victory when Sainsbury’s, which adjoins the bus station on one side – The Mall on the other – finally agreed to repair the lifts which hadn’t been working for 18 months.”

£1.1m is set to be sent on the site, with Maidstone Borough Council providing the “lion’s share” of the cash.

Kent County Council, Arriva buses and Capital and Regional are each contributing £30k towards the project.

Denise added: “Where is the customer investment and care from the likes of Arriva, Sainsbury’s and Capital & Regional in all this?

“I commend Maidstone Borough Council for stepping in with the lion’s share of a £1.1m investment – it, too, is probably at the end of its tether in trying to get standards raised.

“But it shouldn’t just be left to the taxpayer to sort this out.

“It should largely be from corporate giants who benefit from shoppers’ custom and who jointly hold on to tens of millions in profits, a small proportion of which should be re-invested in improving customer experience and standards.”