A weekly newspaper has illustrated its desire to kick coronavirus off its patch by using its famous symbol in a front page cartoon.

The Isle of Man Examiner depicted the island’s unique triskellion symbol kicking a COVID-19 particle on its cover this week.

The symbol, which shows three conjoined armoured legs, appears on both the Manx flag and coat of arms.

The cartoon was created by Phil Woodford, who lives on the island and who used to draw cartoons for the Examiner regularly. 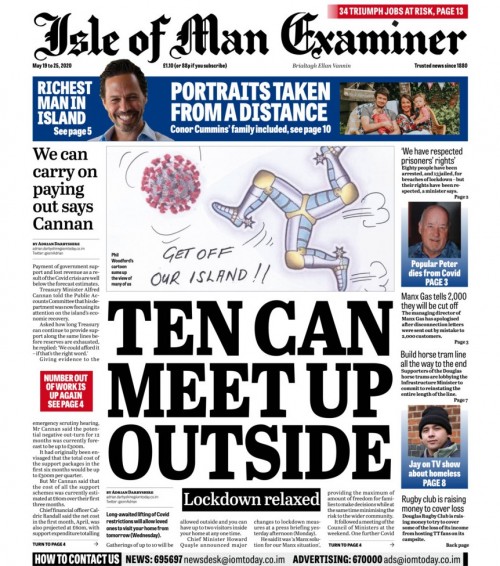 Editor Richard Butt told HTFP: “He submitted it to us unbidden and we were very grateful. It summed up the feeling of many Manx people.

“We want to kick the disease out of the island. What better way to kick than with the island’s three legs?

“The Isle of Man has a different lockdown from our friends in the UK, so our news is essential for our citizens.

“The coverage of what’s happening across the water might be interesting to them. But it’s irrelevant for their daily lives.”

The island is currently in a state of emergency and its border with the UK has effectively been shut since 26 March, with the official advice to citizens there differing from that of the UK government.

Richard added: “Originally, I had planned a picture of the main shopping street because non-essential shops opened on deadline day.

“It should have been a big day for us. But it was wet and, in spite of the best efforts of our photographer, the shots were not very inspiring and would have sold few newspapers.

“I was delighted when Phil’s cartoon came in, so I changed my plan.”