The press watchdog has upheld a complaint by a convicted stalker against a daily newspaper.

The Glasgow-based Daily Record reported that Jill Sharp “silently stalked” a man over the internet for four years, created a fake Twitter account claiming to be the man, and sent “romantic” messages between their accounts.

Ms Sharp was charged in 2018 with stalking the man named in the story, although the charge was later dropped.

The Independent Press Standards Organisation concluded that reporting as fact that Ms Sharp had “stalked” the man constituted a failure to distinguish comment, conjecture and fact on the part of the Record. 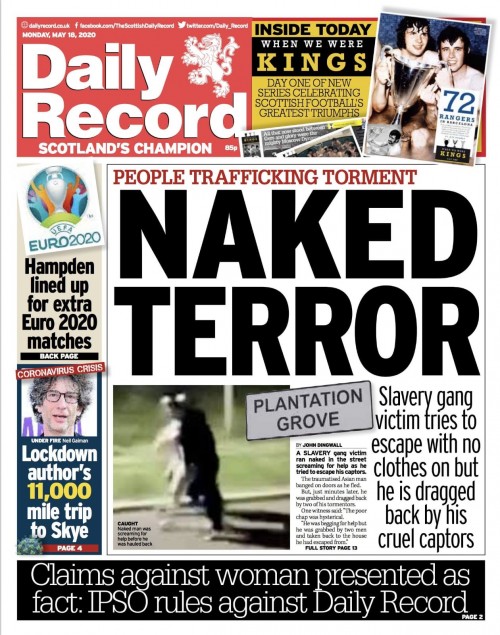 However, during the course of IPSO’s investigation, Ms Sharp was jailed for one year after admitting stalking a married couple who she believed were responsible for the stories which were published by the Record.

Complaining under Clause 1 (Accuracy), Clause 2 (Privacy), Clause 3 (Harassment) and Clause 4 (Intrusion into grief or shock) of the Editors’ Code of Practice, Ms Sharp said she was the victim of a “hoax” and that the story was false.

She said she briefly spoke to a reporter over the telephone but they did not make clear to her that the allegations related to any Twitter activity, and they did not mention that an article would subsequently be published.

However the Record responded that the charges had been dropped due to the man declining to be a witness and appear in court, rather than a lack of evidence.

It said  its reporter had put the allegations to Ms Sharp, including the fact that social media activity was involved, and informed her that an article would be published.

IPSO found the Record had reported serious claims about Ms Sharp’s conducts as fact – including on the front page – describing her variously as a “stalker”, a “fantasist”, and as having spun a “web of lies”.

It found the paper was unable to point to evidence that it had obtained at the time of publication that proved that she was the operator of the Twitter account.

In these circumstances, reporting as fact that Sharp was responsible for the Twitter account and had “stalked” the man constituted a failure to distinguish comment, conjecture and fact.

IPSO added that presenting these claims as fact constituted a failure to take care not to publish misleading information, finding the coverage was significantly misleading as to the status of these serious allegations.

The Committee ordered the publication of a correction to be referenced on the front page, with the full correction continuing on page two.

The complaint was upheld in part, and the full adjudication can be read here.