Top cop praises daily as it winds up anti-scam campaign

A top cop has praised a regional daily’s three-month bid to protect its patch’s pensioners from scams.

The Paisley Daily Express has brought its Protect Our Pensioners campaign to a close after working to make OAPs aware of the dangers posed by con artists operating in Renfrewshire.

Hundreds of informative stickers have been given out to pensioners, while the Express has been supported by Renfrewshire politicians and even made its way to Scottish Parliament. 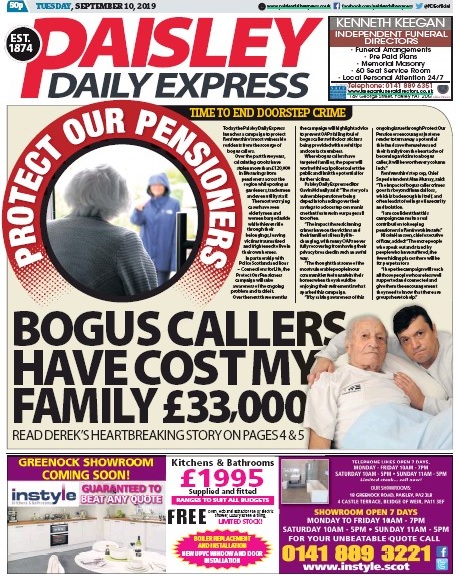 The campaign was launched in September

He said: “I am delighted with what has been achieved by the Paisley Daily Express’ Protect Our Pensioners campaign.

“Raising awareness of this type of criminality – such as bogus callers – that pensioners might fall victim to is an essential part of preventing more crimes occurring and ensuring vulnerable members of our community are kept safe.

“The involvement of partners and commercial organisations was also of great benefit as there is no single organisation which can properly address this issue in isolation.

“I would like to thank the Paisley Daily Express and everyone else who contributed to the campaign. I am confident it has made a very real difference.”

Protect Our Pensioners was given special recognition during General Questions in Scottish Parliament, when Labour MSP Neil Bibby highlighted the efforts being made by the campaign to raise awareness of doorstep crooks.

Mhairi Black, MP for Paisley and Renfrewshire South, also urged members of the community to get involved in the campaign to help tackle bogus crime.

Express editor Gavin McInally said: “When we launched Protect Our Pensioners we said that if we were able to prevent even just one person being duped out of their life savings, then we would have succeeded.

“In three months, we have engaged with hundreds of elderly people in Renfrewshire and worked alongside a number of organisations to spread awareness of bogus crime and inform people on how to stay safe.

“Our stickers were a fantastic success and our message has even garnered support in Scottish Parliament.

“We would like to thank everyone who has helped get our message out there.”