Thug jailed for three years after attacking reporter outside court 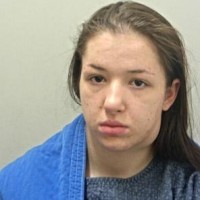 A violent offender has been jailed for attacking a reporter who covered her court case.

Tegan Philips has been sentenced to three years in prison after she attacked Wendy Barlow in a car park near Burnley Magistrates’ Court as she attempted to steal the journalist’s notebook.

Preston Crown Court had heard how the 21-year-old “stalked” Wendy after she saw her taking notes while her case was being heard.

Philips, pictured, then dragged her out of her car and pulled her to the ground.

Freelance Wendy, who started her career at the Rossendale Free Press, has branded the assault a “direct attack on the right of journalists to carry out our jobs”.

The court heard Philps had burst out of some bushes in front of Wendy’s vehicle, shouting: “Have you been writing about me?”

She then repeatedly demanded the 60-year-old wind down the window and hand over her notebook before pulling open the door and standing between Wendy and the door when she refused.

Wendy ignored further demands for her notepad and Philips then dragged her out of her vehicle, away from the car and pulled her to the ground as she tried to wrestle her ignition key from her right hand, the court was told.

The assault only ended when a solicitor heard the victim shouting for help and Philips let Wendy go as he went over, although the defendant then stole her iPad and walked off with it.

Wendy, who had been diagnosed with early stage breast cancer the previous year, suffered soreness to her right side and was left too afraid to go to work after the ordeal.

Philips, a “persistent offender” with a record mainly for criminal damage and fighting with police officers, had appeared before magistrates on the day of the assault for head-butting two house windows.

She was detained under the Mental Health Act after the offence on 10 September last year, but is now starting her first term behind bars for the attack.

Wendy, who has covered courts for national and local newspapers and websites for more than 30 years, read out her victim personal statement to the court herself.

She said: “In the days after the attack, I was very nervous going about my daily business. I was scared and worried about going to work in Burnley, as Philips was not on any bail conditions after her arrest.

“Indeed, such was my concern I did not go to work for two weeks. I felt uneasy the entire time I was in Burnley, was constantly looking around me and did not file any copy in my car at lunchtime as I often used to.

“All this said, however, I have known and had to face head-on some really tough challenges in my life in recent times, they haven’t broken me and neither will Tegan Philips.”

Wendy added the case was “not just about me”.

She told the court: “The hearing and sentence passed today will be watched with interest by my colleagues. This offence was a direct attack on the right of journalists to carry out our jobs, by a defendant intent on trying to prevent the lawful reporting of her case.

“Reporters have long been allowed to cover criminal courts, whether defendants like it or not and they cannot dictate to us what we do. It is our job to inform the public and it is vital that our freedom to carry out our jobs is not interfered with.

“Nobody has the right to use violence and intimidation to try and silence us, whatever their views on what we do and we are entitled, like everybody else, to be protected by the law as we go about our lawful duties.”

Lucy Wright, defending Philips, told the court a psychiatrist found she has an emotionally unstable personality disorder, adding her client had tried to take her own life multiple times.

Sentencing Philips, Recorder Nick Clarke QC said: “You had seen Wendy Barlow making notes, as she was entitled to and you did not wish her to publicise any further involvement in crime. You intentionally stalked her to her car, determined to try to stop her.”

He added: “Open justice requires reporting and the court must protect those who carry out this important role.”

Speaking after the hearing, Wendy said she took “no pleasure in seeing a troubled young woman locked up”.

She added: “However, in imposing the three-year sentence today, the judge has sent out the message that violence against journalists reporting on the work of the criminal justice system -and therefore carrying out a key role in open justice- will not be tolerated.”

“I have been subjected to a lot of verbal abuse and a few threats over the years, but nothing remotely like this has ever happened before.

“I do believe Philips is genuinely sorry. She pleaded guilty and turned up to face the music and that helps me to move on.”