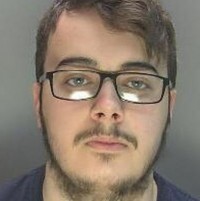 A teenage baby rapist has been named for the first time thanks to a successful court challenge by a regional news website.

Herts Live has won the right to name 17-year-old paedophile Callum Scott, who filmed himself raping an 18-month-old child just weeks before he stalked and sexually abused a schoolgirl in an alleyway.

Scott, pictured, had been given up to police by his own grandmother after his attack on the 11-year-old girl prompted a police appeal, which was covered by Herts Live.

However, due to his age, his identity had been protected for the duration of his trial at St Albans Crown Court.

Richard told HTFP: “The basis of the letter was around the fact that his 18th birthday is in July so keeping the order in place didn’t serve justice when it would expire imminently anyway.

“Coupled with that was the fact that there was a police CCTV appeal at the time of the offending, which was seen by at least 15,000 people that we know of, so part of his identity had already been in the public domain.

“The main thing the judge pointed to was the short time until his birthday, coupled with the overwhelming public interest in the case.”

After police investigated Scott over the attack on the schoolgirl, they discovered a horde of child sexual abuse images on his electronic devices, as well as evidence of a series of horrific sexual assaults on the baby.

He pleaded guilty to a total of 15 offences and has been sentenced to eight-and-a-half years behind bars.

Alice said: “The indescribable actions of Scott needed to be shared and it was so crucial to be able to do that in the matter of public interest.

“Without his name it would have been likely that the public would never have known how truly dangerous he is.

“For Judge Grey to side in our favour and allow us to name him was a great success and I truly hope Scott’s victims now have some peace knowing he has a lengthy sentence ahead of him.”