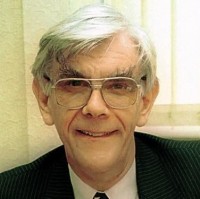 A regional press editorial director and journalism training chief has died aged 81 after a short illness.

Tributes have been paid to Richard Taylor, known as Dick, who edited the Wakefield Express and West Sussex County Times.

Dick, pictured, was editor-in-chief of the Express from 1978 and then editorial director of its parent company, the Yorkshire Weekly Newspaper Group, until his retirement in 2004.

He was also known for his work with the National Council for the Training of Journalists, sitting on its examinations board until 2012.

NCTJ chief executive Joanne Butcher said: “Those of us at the NCTJ who worked with Dick are heartbroken to hear of his death.

“He was a much-loved and well-respected senior examiner of National NCTJ qualifications and was closely involved in so many aspects of the charity’s work over many years until his retirement from our examinations board in 2012.

“He was a wonderful character and embodied the high journalistic standards the NCTJ has always promoted.

“Dick wasn’t afraid to challenge decisions and we admired him for that because his knowledge and experience were always sound and he was usually proved right.

“He also presented his opinions with a twinkle in his eye – everyone who knew Dick well will remember that look. Most of all, though, Dick was a proud family man and our thoughts at this time are with his beloved wife Lavinia and all the family.”

A native of King’s Lynn, Dick’s mother’s side of the family worked in journalism and he began his career as a trainee reporter in the town.

He later moved to Sudbury to become assistant editor of the Suffolk Free Press, aged just 22, before becoming news editor of the East Anglian Daily Times a few years later.

Dick was headhunted by London-based news distribution service Central Press, working out of an office on Fleet Street and travelling the country in search of stories, but returned to the regional press after accepting the editor’s job at the County Times.

He moved to Yorkshire in 1977 to take charge of the Express.

Ed Asquith, who was editor of the Express from 1998 and succeeded Dick as editorial director, told the newspaper “He was a strong and experienced editorial leader who handled a lot of big issues – the transition to the ownership by Johnston Press, the local impacts of the miners’ strike and the expansion of editorial computerisation.

“He arched the era from typewriter to digital and led a very varied portfolio of titles which had a great mix of individuals, many of whom enjoyed high-flying careers.

“Behind what might have appeared to some as a headmasterly manner, he was a witty and gentlemanly figure – and a constant in times of great social and media changes.”

Dick, who lived in the Wakefield suburb of Sandal, leaves behind Lavinia, his wife of 57 years, daughter Alison, granddaughters Elizabeth and Sophie and nine-month-old great-grandson Alfie George.