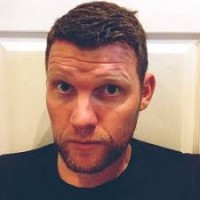 A sports journalist has opened up on how the coronavirus crisis exacerbated “severe depression” he has suffered.

Dave Powell, of the Chester Chronicle, has gone public on the mental health issues he has experienced recently in a bid to help others going through the same thing.

In a series of posts on Twitter, Dave revealed how he had been feeling “very low for a long time and got progressively worse until breaking point a few weeks ago”.

He has since received treatment and has now encouraged others who are suffering to get in touch with him if they need advice.

Have been very low for a long time and got progressively worse until breaking point a few weeks ago. Pretty severe depression.

I’d buried grief for my dad, had a new baby in the house before all this coronavirus stuff.

Dave, pictured, told HTFP: “I had been struggling with my mental health for some time but had tried to just muddle through.

“I lost my dad last year and didn’t grieve for him at the time. I had a son on the way, which he was very excited about, and I had a number of professional opportunities that had been presented to me that I could really have done with some advice on.

“My way of working then changed to me being based at home and that coincided with my son being born in September of last year. A lot of things has arrived at once and I started to struggle.

“The recent situation with COVID-19 only served to exacerbate my depression and I was very low indeed and struggling to see a way through.

“I ignored pleas for me to seek help from my wife for some time before we eventually sat down and I laid out how I was feeling. She could see how ill I was.

“I found talking it over helped enormously and I agreed to seek help, which has been hugely beneficial. I am very lucky to have such a supportive wife.”

Dave is the latest in a string of journalists working in the regional press to have also gone public on their own experiences with mental health in recent years.

He has previously written stories himself on footballers including Kevin Ellison and Drewe Broughton on their mental health battles.

Chester Football Club joint manager Anthony Johnson and Altrincham FC player Craig Mahon are among those to praise him for sharing his story.

Dave added: “I didn’t think it would be something that would affect me but it can hit anyone and anytime. I do a job I adore, have a wonderful wife, daughter and son and I really felt like I had nothing to complain about, but not grieving for my family and bottling things up was damaging.

“The reaction I had on social media blew me away. I had countless private messages from people who shared their own stories with me, from Chester fans and beyond. It really opened my eyes as to how people need to talk about these things.

“Men aren’t good at sharing and being vulnerable and I counted myself in that. But speaking to people is the first step on the road to getting better.

“I am so thankful to those who shared kind messages with me and I’m feeling more like the old me. I have a way to go but I feel more positive than I have for a long time and if I could help another person find that kind of path then that would be fantastic.

“These are strange times that test our mental health like never before. We need to be there for each other.”