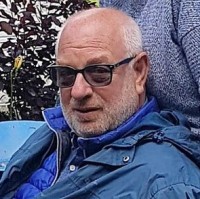 A sports journalist has died of cancer aged 63 just days after filing his last story.

Tributes have been paid to David Kelso, who worked for both The Scotsman and Scotland on Sunday.

David, pictured, wrote primarily on rugby and cricket after spotting a “gap in sports coverage” in Scotland.

He filed his final story from a hospital bed on 30 October, but became too ill to carry on and died four days later.

“A time for remembering fun times on rugby tours and press box banter.”

David began his local press career in Clydebank in the mid-1970s.

According to an obituary in The Scotsman, he “quickly revealed not only an unerring eye for a good story, but also a flair for sub-editing and page design”.

David then joined the Glasgow-based Daily Record as a sub-editor but was later poached by the Scottish Sun, where he served as night editor and later assistant editor.

The Scotsman’s obituary added: “However, his first love of breaking news stories saw him carve out a new career as a freelance reporter.

“He was a regular on the press benches at Dumbarton Sheriff Court where he broke several exclusives.

“Having spotted a gap in sports coverage, Mr Kelso established himself as the leading freelance rugby correspondent in the country and developed a particular niche in supplying the tabloids with user-friendly copy.”

Having lived most of his life in Glasgow, he spent his final years on the Isle of Arran where he ran a successful bed and breakfast business in addition to continuing his freelance work.

David is survived by partner Carol and sons Roddy and Duncan.