A retired editor has appeared on his old newspaper’s front page after being made a city’s mayor.

Former Wells Journal editor Philip Welch has become the 647th person in the Somerset city to hold the office.

Philip edited the Wells-based Mid Somerset Series for 16 years before his retirement in 2013.

His appointment saw his picture appear on the front page of the Journal – something he never allowed while he was in charge of the newspaper. 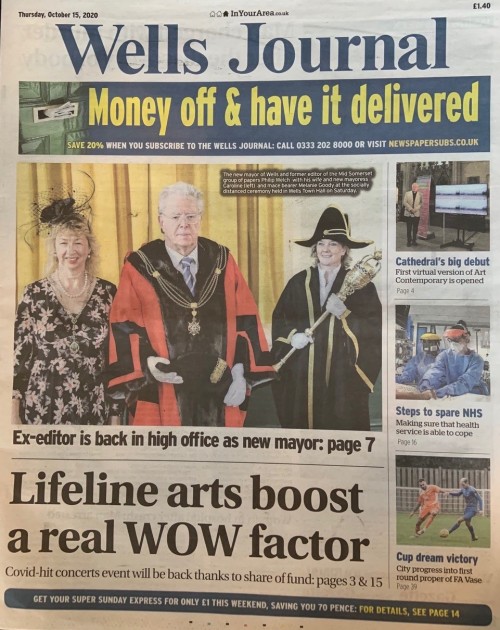 Philip told HTFP: “Being chosen as the mayor of the place you love is an enormous honour and deeply humbling.

“But this year’s Mayor Making in Wells Town Hall was slightly different because of Covid.

“The usual five hours of pomp and ceremony with 100 guests, drinks, supper, even a disco – none of that happened this time.

“Instead the Rule of Six meant only half a dozen took part in a basic 15-minute ceremony in the huge Wells Town Hall ballroom, then I as the new mayor took my grandchildren for a pizza at nearby Ask restaurant.”

Philip, who spent 43 years in newspapers, trained as a reporter on the Birkenhead News before moving to the Oxford Mail.

The mayoress is his wife Caroline, who he met in 1994 at Bristol United Press.

At the time, she was health reporter for the Western Daily Press and Philip the chief sub responsible for the Bristol Evening Post’s six district editions.