Regional newspapers which ceased publication due to the coronavirus outbreak have returned in print for the first time.

The Newry Reporter relaunched yesterday after an eight-week hiatus – the first in its 153-year history.

Spectator Newspapers – which runs the County Down Spectator, Newtownards Chronicle and the Mourne Observer – has also returned after last being published on 26 March.

The titles were among a number across Great Britain and Northern Ireland to temporarily halt production following the COVID-190 outbreak. 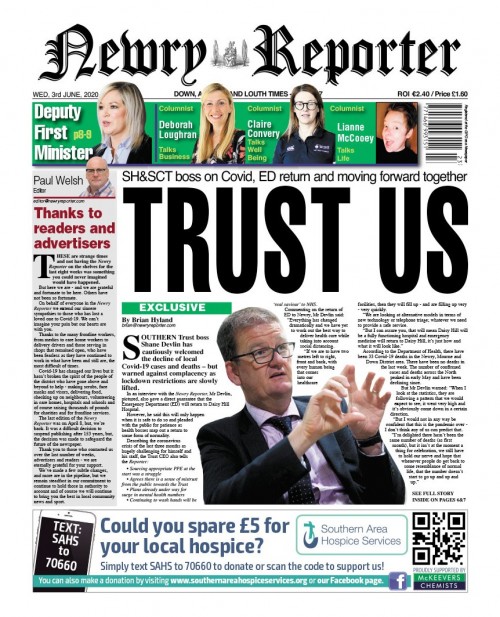 Reporter editor Paul Welsh told HTFP: “The break did afford us the opportunity to have a review of where we are from an editorial stance – what we were doing, the direction we were heading.

“From that we’ve made some subtle changes including the introduction of a few new local columnists and a bit of tinkering with the layout amongst other moves.

“We’ve returned with a skeleton crew and reduced pagination, but I’d be hopeful that over the coming weeks as we pick up momentum again, staff and page numbers will increase.”

It is understood the Reporter’s Hodgett family-owned sister title the Banbridge Chronicle will return to print later on in June.

Spectator Newspapers’ titles returned to print on 28 May with a pledge to donate 10p from every sale to North Down and Ards Women’s Aid.