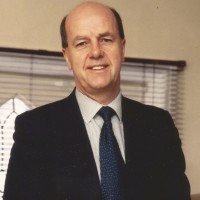 A regional journalist who went on to launch his own news agency and a number of other businesses has died aged 81.

Tributes have been paid to Eric Mackereth, who worked on title including the Shrewsbury Chronicle, Birmingham’s Sunday Mercury and Wolverhampton daily the Express & Star.

In 1962, he formed a news agency partnership with John Rea, a former Express & Star photographer.

Eric, pictured, then set up public relations and advertising company Impact Information before moving into technology and founding the BMC group of companies.

Originally from Cumbria, he had relocated to Shrewsbury in the 1950s and also had spells with the Daily Express, in Manchester, and the Daily Mail.

Away from journalism, he was known for his musical talent and love of sport.

His friend Peter Williams told the Shropshire Star: “He served on many, many committees and of course was very well known.

“Attendance at the funeral was restricted inside, as these are strange times, but that didn’t stop many people from across Shropshire from turning up to stand at the gate to the crematorium to pay their respects.

“Eric was a well respected man. We have a lot to thank him for and he’ll be sorely missed by his family and friends.”

His funeral was held at Shrewsbury Crematorium on 6 July.