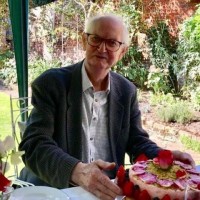 A regional journalist who went on to become an authority on stamp collecting has died aged 90.

Tributes have been paid to Colin Narbeth, who worked for the East Essex Gazette before going into specialist publications.

Colin, pictured, began his career as a cub reporter aged 15, but later left the Gazette in the late 1960s to become launch editor at Stamp Weekly.

Discussing his time at the Gazette, his son Simon told the newspaper: “On one occasion getting to the scene of a murder before the police because he was tipped off by the telephone exchange operator.

“He had always collected stamps, coins, medals and more, and contributed articles on various subjects to various journals.

“In 1961 he founded the International Banknote Society and edited its journal, produced on a hand-operated Gestetner printer, mailing it out to around 20 people.

“The society now has a membership of over 2,000 from 90 different countries.”

Colin’s time at the Gazette sandwiched a seven-year spell in the Royal Navy.

He also wrote more than 20 books on currency and stamp collecting.

Colin died on 2 May following an illness.