Regional journalist celebrates half a century in industry 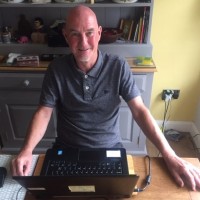 A regional journalist is celebrating half a century working in the industry today.

John Walton, pictured, began his career on 27 July 1970 as a trainee reporter at the Burnley Express and has since worked for titles across the North of England during the following 50 years.

The Blackburn-based Telegraph was among the dailies for which John had previously worked during his career.

He told HTFP: “It’s strange to click up 50 years, it just sort of crept up on me. Obviously walking into a newspaper office today, even if you could do at the moment, was totally different back in 1970 to now.

“Smoke, spikes, glue (in the subs’ room at least), typewriter noise etc. And when I joined the Telegraph in 1979 there was still a Saturday morning tradition of beer at the subs’ desk. Yes, pint bottles at 10am.

“However I think journalists are still the same as they ever were. I’ve worked with the occasional duffer over the years but the young reporters I’ve come across are largely hard-working, conscientious and out to do the best job often in difficult circumstances.

“As ever, regional journalists are poorly paid and that remains a big disappointment. But I’ve had a lot of fun, made loads of wonderful friends and plenty of memories over 50 years.”

John trained at Preston’s Harris College, now part of the University of Central Lancashire, where he was a student on its first-ever NCTJ pre-entry course.

He joined the Express Keith Hall, who was later to head the NCTJ, and spent nine years there before joining the Telegraph and its sister daily the Burnley Evening Star.

In 1986, John was appointed deputy features editor at the Bradford Telegraph & Argus, where he would go on to spend 29 years.

By the time of his retirement in 2015, John was part of the subbing pool producing papers for all of the Newsquest North East.

John said: “In and among the daily work I shifted on the Daily Mail and Daily Star when they had large Manchester offices, while enjoyed three or four years doing Saturday sports shifts on the Sunday Sport.

“There I was handed my own byline of Big Jock Walton by sports editor Gordon Watt for my Scots edition match rewrites, and I frequently became the voice of former Liverpool star Tommy Smith for his ghosted match reports.”

Since 2015 he has mostly worked part-time for titles including the T&A, Telegraph and News.

He also spent time at the Oldham production hub at which the Manchester Evening News, Liverpool Echo and Huddersfield Daily Examiner are produced.

John and his wife Bev will celebrate their 40th wedding anniversary in September, while he also turns 70 in November.