People turned to the regional press in their droves last night after the government’s impromptu announcement of new lockdown measures affecting millions of people.

Amid confusion after Health secretary Matt Hancock revealed that new measures affecting parts of the North of England and the Midlands, regional news sites were inundated with enquiries from concerned readers.

Greater Manchester is the largest area affected by the announcement, and a Manchester Evening News live blog had been viewed more than half a million times within a matter of hours.

The MEN also splashed on the announcement this morning. 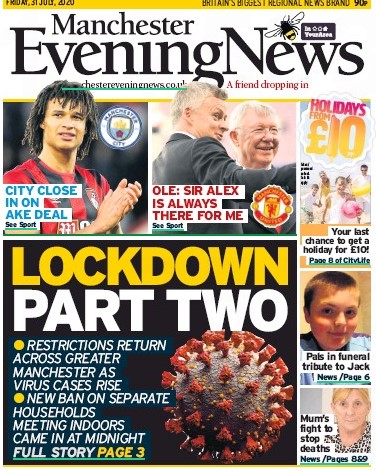 Editor-in-chief Darren Thwaites told HTFP: “It was a magnificent effort from the team to try to make sense of what was a fairly chaotic announcement late in the evening. We provided responsive, trusted journalism through the night, reaching a huge audience with real authority.

“It’s always reassuring to see how much our work is valued by readers, not just through the several million page views we generated but also the many positive endorsements on social media.

“People turn to trusted regional brands like the Manchester Evening News when they need to make sense of things. Our news brands are as important and influential today as they have ever been over the last 150 years.”

The Leicester Mercury was also able to splash on the announcement as it was made just prior to the newspaper going to press.

An announcement relating to Leicester, which had previously been placed under stricter measures to the rest of England, had been expected earlier in the day.

Deputy chief sub-editor Richard Price posted on Twitter: “One of the most frustrating days I can remember at the Mercury.

“Desperate to get the most up to date front page, pushed deadline until the press were getting twitchy and in the end we’re an afterthought.” 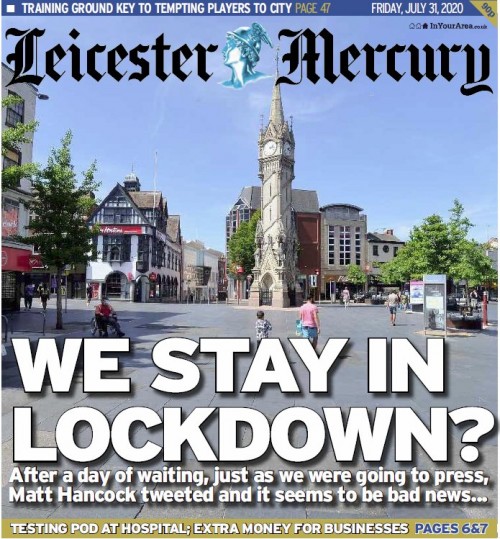